A student from Phoenix High School presents his project to judges in Shineman Center at the competition. (Neeny Phakdeetham | The Oswegonian)

The winners were ninth graders from Phoenix Central High School: Nicholas Bernard and Jonathan George. These students presented a project called “How Does Climate Change Affect the Cryosphere?” The project focused on the positive and negative effects of the climate change on the cryosphere. The cryosphere is the portions of the earth that are permanently and temporarily solid water surface, such as glaciers and frozen ground. It plays a major role in climate change because changes in the cryosphere have the potential to flood areas like Hawaii and Indonesia. Animals, like polar bears, are facing problems with the loss of habitat. Many other animals are migrating to different parts of the world to find an environment they can survive in. Moreover, severe storms form because of the increased ocean temperature.

Bernard and George said there are still some benefits that come with the change. Climate change actually increased vegetation and habitats for humans because the weather is no longer brutally cold. It is also gives opportunity for scientists to explore natural resources that were previously hidden in the tundra climate. This makes it easier for ships to transport goods and it reduces dependency on foreign resources.

Bernard and George won $2,000 for Phoenix Central School’s science department. They also got a spot to compete in the International GENIUS Olympiad that is coming up next month. High school students from different parts of the United States and all over the world are going to compete against one another to receive the GENIUS title. Bernard and George will get to travel to Niagara Falls with international participants from the International GENIUS Olympiad competition.

Sharp stressed the importance of global warming issues. She is planning to spend the $2,000 for “projects that are going to be related with carbon dioxide emission.”

Shane Girard was the second place winner, also a ninth grader from Phoenix Central High School. He received an Aquaponic garden prize with his “Melting Ice Caps from Global Warming” project. Aquaponic garden is a fish tank that comes with a small garden on top. Fish produce waste that is great fertilizers for plants, and plants purify water for fish. It is a mutually beneficial relationship.

The competition was a great way to provide a forum for Oswego County students to come together and share ideas that will help save our planet. The International GENIUS Olympiad will take place from June 15 to 20 on to June 20.

View this document on Scribd

We’re here today at SUNY Oswego’s Sustainability Fair hosting the Oswego County GENIUS Olympiad. Students from Fulton City Schools and Central Square Schools created sustainable and environmentally related projects for a chance to win money for their school as well as move on to the State and National GENIUS competitions. 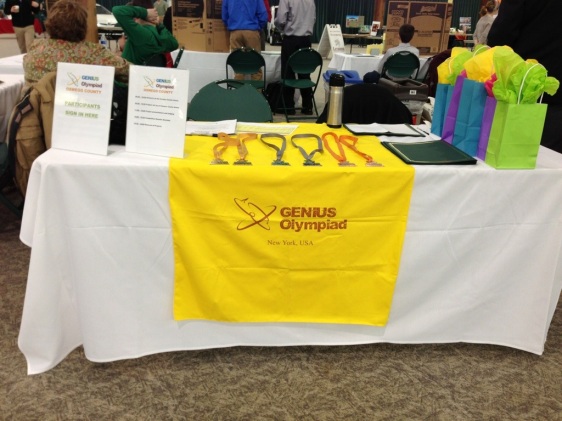