Disclaimer: Some of the views expressed here are that of the Lieutenant Governor and not of SUNY Oswego Civic Engagement. 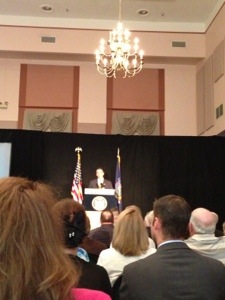 He started by thanking what SUNY system has done for New York State, President Deborah Stanley for her hard work and dedication, and Mayor Gillen among many others.

What is Start Up New York? (Click here for the full explanation)

START-UP NY will foster entrepreneurial-ism and job creation on a large scale by transforming public higher education through tax-free communities across the state, particularly upstate.

Details of the START-UP NY legislation include:

Tax-Free: Participating companies in START-UP NY will not pay any taxes (e.g. business/corporate taxes, sales taxes and property taxes) for 10 years. Employees in participating companies will pay no income taxes for the first five years. For the second five years, employees will pay no taxes on income up to $200,000 of wages for individuals, $250,000 for a head of household, and $300,000 for taxpayers filing a joint return. The number of net new jobs eligible for personal income tax benefits will not exceed 10,000 new jobs per year.

Business Eligibility: In order to locate into a START-UP NY tax-free community, a business will need to be aligned with or further the academic mission of the campus, college or university sponsoring the tax-free community. Businesses participating in the program will need to have positive community and economic benefits. Every business must create and maintain net new jobs in order to participate. Businesses must:

According to Duffy, this economic plan is important to the vitality of New York’s economy and its future.

Duffy’s PowerPoint explained how efficient this government has been, passing 3 budgets on time and not adding any new taxes for New York residence. He also spoke about the new teacher evaluations and marriage equality being at the head of Governor Cuomo’s initiatives.

Duffy also said that the administration is looking towards making social change in New York while also showing fiscal responsibility, starting with finding other ways to fixing the issues face by local economies;ways that do not include “simply throwing money at it.” This project is headed by the financial restructuring board, which helps local governments in times of financial stress.

Lieutenant Governor Duffy concluded his talk with how much he cared about upstate [New York]. As former Mayor of Rochester and long time resident of the Central New York area, he understands the hardships that many residents are dealing with. This program, Duffy said, will help revitalize the cities that house SUNY schools and private universities around the state, giving internships to current students and jobs to post-graduates.